The growth of the exports in almost all main sectors slowed down in January-November 2018 compared to the growth rate of the previous year, except in forest industry products, the export of which rose by a tenth. Exports of machinery grew by six per cent, but exports of transport equipment decreased by four per cent due to the many ship deliveries in the year of comparison. Exports of motor vehicles increased by 16 per cent. Exports of metal industry products increased by more than one tenth. The value of petroleum product exports also increased in line with the increased export prices. Other chemical industry exports increased moderately, except for medicine exports, which decreased. Finnish Customs will publish detailed country and goods statistics on the foreign trade in goods for the whole of last year on 28 February 2019.

The growth of the value of goods imports also decreased in January-November 2018. The imports of transport equipment and foodstuffs remained at the same level as the corresponding period the year before. Imports of industrial production supplies and capital goods grew somewhat, but the value of imports of fuels and lubricants increased rapidly due to the price increase. Imports of consumer goods increased slightly.

Overall development, million euros (the figures for 2018 are based on preliminary statistics)

According to data from January-November 2018, the share of machinery and vehicle industry products of the total goods exports was 21.2 per cent. The share went down by one per cent compared to 2017, but the group is still the largest export sector. The share of forest industry products of the goods exports increased somewhat to 20.4 per cent last year from 20 per cent the year before. This was our second largest export sector. There was also a slight increase in chemical industry exports last year; the share was 19.4 per cent. These three sectors cover 61 per cent of the total goods exports of Finland. In January-November 2018, the share of the metal industry was 15.6 per cent and the electric and electronic industry’s share was 11.6 per cent. The changes were rather small compared to the year before.

Exports of metalliferous ores and metal scrap increased quickly; 29 per cent. Exports of instruments and meters went up by seven per cent in January-November, but exports of foodstuffs went down by five per cent.

The 24 per cent increase in the value of the imports of fuels and lubricants had the greatest impact on the growth of the value of goods imports in January-November. Imports of crude oil increased by 29 per cent. The growth was almost entirely due to the increase in import prices. The import volumes only rose by one per cent. The import prices of petroleum products rose by 23 per cent while the import volumes decreased by nine per cent.

Note: scale of vertical axis begins at 45 per cent.

Germany is our biggest trading partner

Sweden came third with a share of 10.9 per cent of the total goods exports in 2018, and China was fourth with a share of 7.0 per cent. The Netherlands came fifth with a 5.4 per cent share in January–November last year and the United States came sixth with 3.3 per cent.

Figure 8. Change in the value of Finland’s exports to Germany, the Netherlands, the United States, Russia, China, United Kingdom and Sweden 2010–2018 (1-11), per cent. 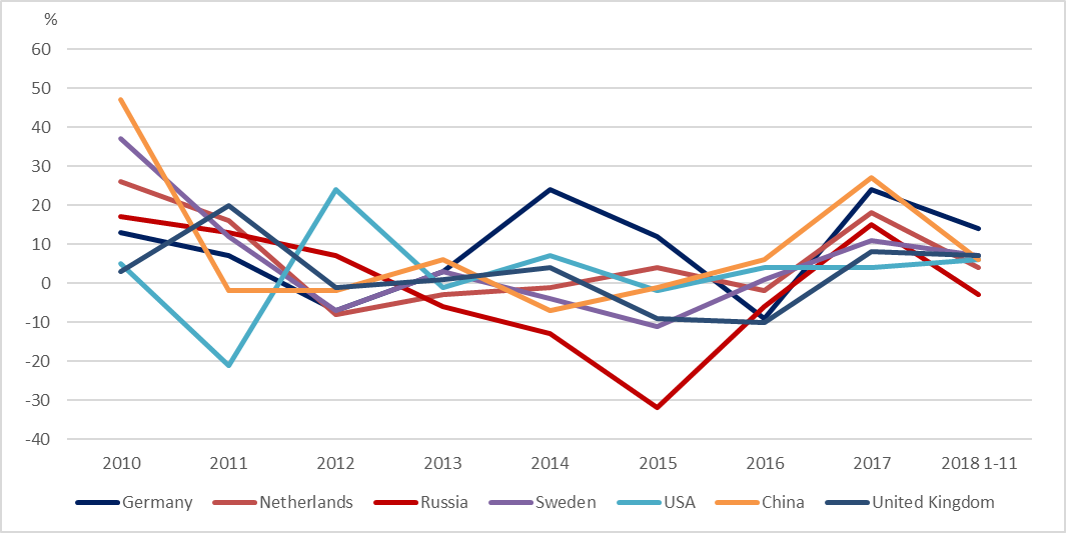 Development of EU countries’ exports in 2018

Excluding Luxembourg, exports showed growth in all EU countries.  Six EU countries reached a growth of more than ten per cent; for example in Estonia, exports went up by 13 per cent. In Finland’s other major trading partner countries the growth in exports was weaker than in Finland. In Germany, Sweden, France and Belgium, exports increased by four per cent. In United Kingdom, exports grew by seven per cent and in the Netherlands, by six per cent. In Denmark, exports only grew by two per cent. 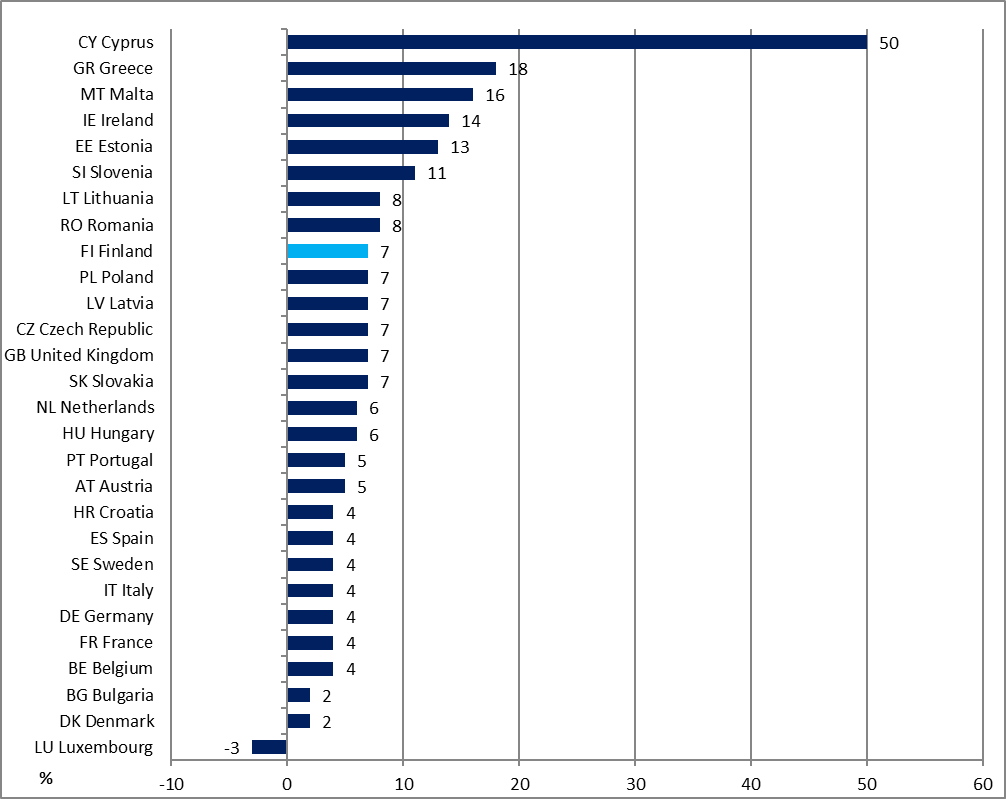